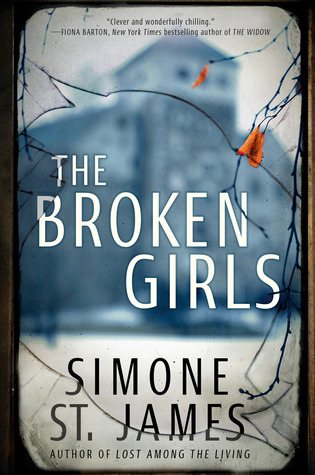 Idlewild was an old place, and the fear here was old fear.

What makes you pick up a book and say, “Oooh, this looks good!”? Is it all about the cover? Or are you pulled in by specific story tropes: courtroom drama, rags to riches romances, etc.? Maybe certain characters always pique your interest, like witches or faeries, or sexy mechanics.

There are certain things that always pull me into a book; a masterfully crafted cover will pull me in, and something like what Simone St. James does with the blurb for The Broken Girls will usually seal the deal.

Blurb:
Vermont, 1950. There’s a place for the girls whom no one wants – the troublemakers, the illegitimate, the too smart for their own good. It’s called Idlewild Hall. And in the small town where it’s located, there are rumors that the boarding school is haunted. Four roommates bond over their whispered fears, their budding friendship blossoming – until one of them mysteriously disappears…

Vermont, 2014. As much as she’s tried, journalist Fiona Sheridan cannot stop revisiting the events surrounding her elder sister’s death. Twenty years ago, her body was found dumped in the overgrown fields near the ruins of Idlewild Hall. And though her sister’s boyfriend was tried and convicted of murder, Fiona can’t shake the suspicion that something was never right about the case.

When Fiona discovers that Idlewild Hall is being restored by an anonymous benefactor, she decides to write a story about it. But a shocking discovery during the renovations will link the loss of her sister to secrets that were meant to stay hidden in the past – and a voice that won’t be silenced.

Thrillers are definitely my go-to reading genre, but add in dual timelines, a real-life bad guy, and a questionably “real” bad-girl ghost along with a group of headstrong girls at a boarding school and there’s no way I wasn’t plucking this one off the shelf!

We were all so horribly afraid.

The Broken Girls is a Vermont-based thriller with side orders of murder mystery and ghost story. Fiona (“Fee”) Sheridan lost her sister to a senseless murder and nothing has been the same in her life since that day 20 years ago. When she learns that mysterious investors plan on restoring the boarding school that sits on the land where her sister’s body was found, Fee decides to write a story about it for the local newspaper (read: invent an excuse so she can investigate it on her own).

Sounds normal enough start for a mystery novel, right? sure. But the book also flashes back to a 1950’s storyline when the boarding school, Idlewild, was open and the ne’er-do-well girls who lived there were being haunted by a ghost named Mary Hand. Yeah, it gets creepy. I’m glad I read this in the daylight hours because let me tell you, Mary Hand was NOT a Casper-type ghost. This chick is angry!

Mary Hand, Mary Hand, Dead and buried underland. She’ll say she wants to be your friend. Do not let her in again.

There is a lot going on in this book. There is plenty of action going on in 1950 all by itself, then you jump back to Fiona’s storyline in 2014 which includes her freelance journalism (and not-so-private investigating), her unorthodox relationship with her policeman boyfriend, and the constant reminder of her sister’s violent death nagging at her. She just can’t let it go.

That’s a lot to juggle. (Not to mention a couple of really intense chase scenes!) And while St. James didn’t keep it balanced successfully throughout the entire book, the story is still engaging, the characters intriguing, and the ending was hauntingly thrilling.

The best thing about this book is that it’s equally appealing to fans of so many different genres (way to stack the deck Simone!). It’s like a mystery, thriller, horror smorgasbord where nobody leaves the book buffet hungry!

I snagged this book on the cheap at Half-Price Books (and I plan on selling it back to them on my next visit. Perks!), and it was a like-new Book of the Month edition. I love finding great deals on fairly new releases. This was surprisingly my first Simone St. James book, but I would gladly read her again. Her writing style is captivating and her characters come alive with each chapter.

And before I end this review, I have to acknowledge the Book Smell Quote that snuck in between all the drama and screaming! One of the boarding school girls, Sonia, gets a notebook as a gift and she does the first thing you’re OBLIGATED to do when you get a new book of any type…

So Sonia picked it up and opened the notebook. She dipped her head down into the book’s spine, inhaling deeply of the thick papery scent, feeling something strange and calm move down the back of her neck, into her shoulders, her spine. She felt small, prickling sparks in the top of her brain.

Simone St. James is the award-winning author of Lost Among the Living; The Other Side of Midnight; Silence for the Dead; An Inquiry into Love and Death, which was shortlisted for the Arthur Ellis Award for Best Novel from Crime Writers of Canada; and the The Haunting of Maddy Clare, which won two RITA Awards from Romance Writers of America and an Arthur Ellis Award from Crime Writers of Canada. She wrote her first ghost story, about a haunted library, when she was in high school, and spent twenty years behind the scenes in the television business before leaving to write full-time.

5 thoughts on “The Broken Girls”