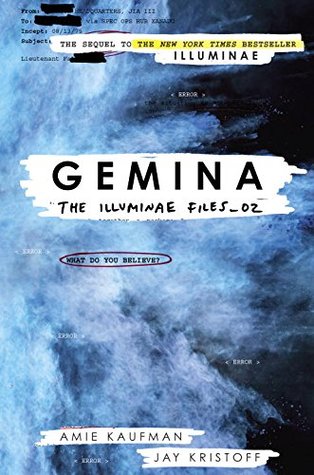 Now, children, watch closely. Hold your breath. Listen. And I will show you the components of calamity.

I’ve decided that any sequel to a highly-rated series debut is like tofu – either you love it or you hate it. Knowing this, I went into reading Gemina with my tongue out and eyes squinted just waiting for it to start tasting bad.

How? How is that possible? How could I love the dynamic between Kady and Ezra from Illuminae SO MUCH and then fall equally in love with Hanna and Niklas?

And how, also, can I be equally as interested in a story where the characters are literally just spinning in circles The.Entire.Time? It shouldn’t be possible. But, folks, I’m here to tell you that Kaufman and Kristoff pulled it off.

Gemina is the story of Hanna Donnelly trying to go to a party. No, seriously. That’s the initial premise. Hanna, daughter of the commander of the space station, Heimdall, just wants to attend the Terra Day celebration and get wasted with her friends and boyfriend after.

And Nik, local bad boy, drug dealer, and member of the intimidating House of Knives gang  (whose presence on the ship isn’t registered), just wants to deliver some “Dust” to Hanna (his crush), get his money, and have some fun of his own (after HoK duties are finished with, of course).

Is that too much to ask? Apparently so.

Just like they were taking a page from all the best (worst?) teen horror flicks, the party is prematurely interrupted by strange goings-on. And by “strange”, I mean that by the end of the night Hanna and Nik are battling both a team of highly-trained killers sent to annihilate everyone on their space station AND twenty or so slimy eel/squid-like multi-headed brain-sucking alien parasites. So there’s that.

They fan out across the room, swift and surgical, the steps of this brutal ballet known by heart.

So Hanna turns out to be much more than the pampered daughter of the commander. She is highly trained in self-defense, a strategist, extremely athletic and resourceful. And she’ll need every bit of those attributes to get her through the occupation by the BeiTech forces. Oh, did I not mention that they are the ones who let loose the killers-for-hire? Yep, it’s them, at it again.

BeiTech is trying to clean up its mess from the Karenza attack (from Illuminae). And by “clean up” I mean “eliminate all possible witnesses”. But Hanna, Nik, and Ella – Nik’s computer wiz of a cousin – will not go quietly into that dark night.

Their time is short for victory, however. The wormhole is acting crazy, the killers on board the station are closing in, and so are the Lamina (the brain-sucking alien parasites). And by this point in the book – all the drama starts pretty early on – my nails are chewed down and I’m turning the pages like a madperson!

Patience and Silence had one beautiful daughter. And her name was Vengeance.

Gemina is fast-paced, well-written, and it’s sufficiently sci-fi and sufficiently YA to please fans of both genres. It is definitely a fitting sequel to Illuminae and a suspenseful sci-fi novel all on its own. I would recommend reading Illuminae first so that you’ll be familiar with some of the supporting characters and how they fit into the matrix of the files, but if you refuse (your prerogative), this is a very good book all on its own. And the format of all of the books in this series (Illuminae, Gemina, and Obsidio) is so unique and compelling that you’ll be sucked into the story before the first 100 pages have passed.

So why not 5 stars? There was only one thing that this book lacked that I found I needed to make it 100 percent perfect: MORE AIDAN!!! Yes, he (it?) is a psychopathic, hyper-moral mass murdering AI, but I love him (it)! He makes cameo appearances throughout, but a little AIDAN is just not enough. Hopefully, Obsidio will set that right and I will be able to see if AIDAN can truly redeem him-(it) self in the end.

And please, please please don’t be intimidated by the size of these books! I know 600+ pages sounds like a lot but, trust me, the style of it (written like file docs, illustrations, and summaries of surveillance footage) will make the pages fly by. I am not the fastest reader, but I managed to get this read within two days. Plus, the fast pace will keep you turning pages to find out what happens next. That’s why, after I hit “save” on this blog entry, I’m headed out to pick up Obsidio. I have to know how the story ends!

Amie Kaufman is a New York Times, USA Today and internationally bestselling author of science fiction and fantasy. Her multi-award winning work has been published in over 35 countries and is in development for film and TV. A couple of her career highlights so far include professional wolf-howling lessons, and working as a story consultant at NASA.

Jay Kristoff is the #1 international, New York Times and USA Today bestselling author of THE NEVERNIGHT CHRONICLE, THE ILLUMINAE FILES, and THE LOTUS WAR. He is the winner of five Aurealis Awards, an ABIA, has over half a million books in print and is published in over thirty-five countries, most of which he has never visited.

3 thoughts on “Gemina (The Illuminae Files #2)”