Tight-knit friendships are all very well and good, but they can close us off from other chances. They can cost us a great deal, in the end.

Have you ever heard that saying, “Wait for the other shoe to drop”? If on the off chance you haven’t, it just means to be prepared for something else to happen – usually something negative or troublesome. The saying invokes a feeling of dread, an anticipation that, at any minute, something will inevitably happen that will change your life for the worse.

This is the general tone of The Lying Game. That incessant feeling of something big and out of control lingering just around the corner. The BoogeyMan that lives in your own personal fear of your past catching up with you.

Isa (rhymes with “nicer”) Wilde lives in a cozy flat with her live-in boyfriend, Owen, and their 6-month old baby girl, Freya. Life is going along nicely until she gets a text: I NEED YOU. Instantly, her world is changed and she knows she has to respond immediately. There is no other choice. That’s the code they use whenever the situation is dire. This time, Isa is afraid that she knows exactly why this text was sent, and it’s something she has been dreading for 17 years.

So it’s begun…. The spell has broken — the illusion that it’s just me and Freya, off on a  seaside holiday for two. I remember why I am really here. I remember what we did.

Isa met Kate, Fatima, and Thea at Salten boarding school all those years ago. They became fast friends and bonded over a game they played together: The Lying Game. From little white lies to big whoppers, the girls fabricated their way through a semester of school, tricking everyone along the way – other students and teachers – about any and everything. They awarded each other points for each time a lie was believed. The game bonded them together, but it also had devastating consequences back then and in present day.

As Isa and her friends respond to Kate’s “I NEED YOU” text, they are each thrust back into the world they were cast away from 17 years ago as a result of their deceit. Each with a  reputation in the small town of Salten as a liar and maybe something a little more damning than that.

I want the ground to swallow me up. Why, why were we so vile? Didn’t we understand what we were doing, when we pitted ourselves against these nice, credulous, well-brought-up girls?

This is my first Ruth Ware book, and I wasn’t disappointed in her writing style or the premise of the story. However, I did spend a lot of the book just waiting for the other shoe to drop. And maybe, for me at least, that shoe took too many chapters to finally fall. The action was a little too stretched out and I didn’t feel that the resolution was satisfying enough. It was a slow burn to a conclusion that wasn’t quite fulfilling.

And although Isa was the main character, I would have loved to have the other girls be a little more fleshed out. Thea was a character that I found to be really interesting and I was interested to know more about her experiences. I wish that her character especially would have been given more focus, and it was a little annoying that more energy was given to Freya’s eating and sleeping patterns than was given to other, more interesting characters.

But three and 1/2 stars is a strong showing and readers who love a bit of mystery and a very atmospheric setting will appreciate this story where you not only have to figure out the truth about whodunit but also what was done and which liar is telling the truth. 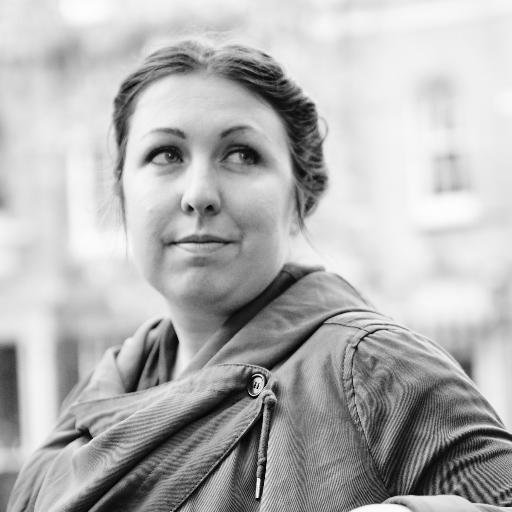 Ruth Ware grew up in Sussex, on the south coast of England. After graduating from Manchester University she moved to Paris, before settling in North London. She has worked as a waitress, a bookseller, a teacher of English as a foreign language and a press officer. She is married with two small children, and In a Dark, Dark Wood is her début thriller.