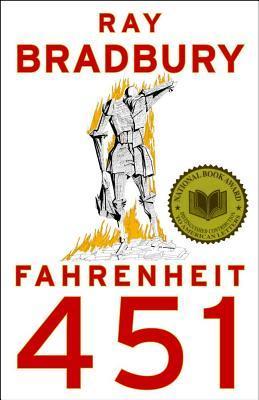 Do you know that books smell like nutmeg or some spice from a foreign land? I loved to smell them when I was a boy…

No, this isn’t a new book or even a nearly-new book. It is, in fact, fairly old having first been published in 1950. But it’s eerily even more relevant today than it was when it was written.

Guy Montag lives in our future, in a place that only seems dystopian to those of us judging from the safety and normalcy of Guy’s past. Guy’s government has set him and all of their citizenry up to enjoy leisurely days and nights unhampered by the worries of deep thought, introspection, and empathy. How did they do it? They destroyed literature, of course. They burned it from the planet and instead left inane room-sized reality TV and speeding race cars in its place. Their escape – their Utopia.

‘Kerosene,’ he said, because the silence had lengthened, ‘is nothing but perfume to me.’

At first, Guy revels in this system. He even operates within it working as a fireman – one who burns books and the houses that hide them. Books have become illegal and the people who own them are criminals subject to arrest and the loss of all they possess. He knows his job and does it well. He glories in the dance of the fire as it burns away the last vestiges of Earth’s ancient wisdom and imagination. But then Guy meets someone who changes his perspective and what once made perfect sense to him is suddenly the cause of his complete metamorphosis.

Isn’t that how it always is? You’re going along just like normal and then, BAM! one thing happens that uproots almost everything you were comfortable doing and thinking previously. It’s amazing how profound a little chink in the chain can be.

Speaking of dystopian societies, F451 reminds me in many ways of The Handmaid’s Tale. In both, subtle decisions made “on high” resulted in extreme changes to civilization as a whole – which then conformed to “someone’s” version of a perfect society. And in both of those societies, reading books was banned. Also in both, certain factions of humanity readily contributed to these modifications and even welcomed them without looking back at what they lost. Seriously, burning books? BOOKS? No more Shakespeare or Austen or the Bible or Qur’an. No more YA or autobiographies, Greek tragedies, or sappy romance novels? No more poetry or prose of any kind, except what is hidden in our heads or our hearts?

The things you’re looking for, Montag, are in the world, but the only way the average chap will ever see ninety-nine percent of them is in a book.

Thinking of that makes me sad for our future because the reality of that world could so easily happen even now with the agreement of a few like-minded heavy-hitters and a few backroom signatures. Then where would be we be? I tell you where I’d be: I’d be Lane Kim from Gilmore Girls hiding Lee Child and Sir Arthur Conan Doyle beneath my floorboards. I’d sneak Janet Evanovich and Tomi Adeyemi paperbacks from the ceiling in my closet to read by the light of a single candle at 2 AM. And I’d tremble through Stephen King and Dean Koontz by the glow of the moon every night. Books would be my Anne Franks hidden in my attic from the fire-happy Nazis who would seek to rip them from me.

I would be like Bradbury’s F451 character, Beatty, the fire chief – living a double life as a conformist during the day and a ravenous consumer of all my pilfered prose at night. And maybe, just maybe, I’d be able to make my usually brittle brain memorize more than just the opening lines to A Tale of Two Cities, or Aidan’s monologue: “Am I not merciful?” from Illuminae. I would make myself learn at least a chapter or two of Little Fires Everywhere and also something, anything, by Chinua Achebe, either of the Brontë sisters, or Neil Gaiman.

Would we all – the bookstagrammers, book bloggers, reviewers, and addicts – then be exiled like the old men beyond the city limits? Would we gather together around our campfires and relay from memory the stories smuggled safely away from the flames? That seems like the Dark Ages, but then again, it makes the Dark Ages seem not quite so dark at all.

And some day, after it sets in us a long time, it’ll come out our hands and our mouths. And a lot of it will be wrong, but just enough of it will be right.

Ray Bradbury’s story of one man’s awakening can be (and has been) interpreted in many different ways. To me, it is a bright neon warning sign to Stop! Pay Attention! Take it All In! Refuse the Dumbing Down of Society! That’s what Guy’s catalyst character, Clarisse, was – a warning – urging him to taste the rain and rub dandelions under his chin. To experience this life, to remember. But the key there was that she made him wonder if he was happy. He had to think about that. And from that one thought alone came all the rest.

Ray Bradbury is one of those rare individuals whose writing has changed the way people think. His more than five hundred published works — short stories, novels, plays, screenplays, television scripts, and verse — exemplify the American imagination at its most creative.

Once read, his words are never forgotten. His best-known and most beloved books, THE MARTIAN CHRONICLES, THE ILLUSTRATED MAN, FAHRENHEIT 451 and SOMETHING WICKED THIS WAY COMES, are masterworks that readers carry with them over a lifetime. His timeless, constant appeal to audiences young and old has proven him to be one of the truly classic authors of the 20th Century — and the 21st.

One thought on “Fahrenheit 451”